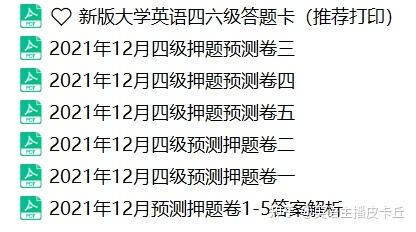 Directions: For this part， you are allowed 30 minutes to write letter to the dining hall of your college about its unstable tables. You should write at least 120 words but no more that 180 word.

Part II Listening Comprehension (25 minutes) Section A Directions: In this section， you will hear three news reports. At the end of each news report， you will hear two or three questions. Both the news report and the questions will be spoken only once. After you hear a question， you must choose the best answer from the four choices marked A)， B)， C) and D). Then mark the corresponding letter on Answer Sheet 1 with a single line through the centre.

Questions 1 and 2 are based on the news report you have just heard. 1. A) The industry of video games. B) Tony Hawk’s childhood， C) Tony Hawk and skateboarding. D) Skateboarding in the White House.

4. A) The speed limit of the extremely sharp curve is 70 miles per hour. B) The straightway requires a speed limit of 30 miles per hour. C) Rescue workers found that seven cars had jumped into the river in the accident. D) The driver stepped on the brakes quickly but they just didn’t work. Questions 5 to 7 are based on the news report you have just heard.

5. A) Nearly half of the Americans are unemployed. B) The income of the average American household declined last year. C) More Americans than ever are living in rich. D) The economic recovery is being felt by all Americans.

6. A) The advantaged citizens. B) The well-educated. C) The old and people living in the north. D) African Americans and Hispanic communities.

8. A) He applied for a job in his university. B) He devoted himself to his studies. C) He spent much time on his disease. D) He transferred to study cosmology.

9. A) It is a bestseller for the average person. B) It is written for those who study the universe. C) It is read mostly by his followers. D) It is hard to read for its profound theories.

10. A) His life is misled by doctors assertion. B) He leads an abnormal life because of his disability. C) He has been misinterpreted by many people， D) His life is beyond all expectations.

11. A) He lives longer than expected. B) He can manage his through his computer. C) He is considered as one of the leading minds. D) His book becomes one of the bestsellers. Questions 12 to 15 are based on the conversation you have just heard.

13. A) To chat online with his brother. B) To search for information for his research. C) To join the newsgroup for discussion. D) To give advice for Internet users.

15. A) Get useful things when using the Internet. B) Never play any online games. C) Use dial-up access instead of broadband Internet access. D) Focus their time on news and information. Section C Directions: In this section， you will hear three passages. At the end of each passage， you will hear some questions. Both the passage and the questions will be spoken only once. After you hear a question， you must choose the best answer from the four choices marked A)，B)，C）and D).Then mark the corresponding letter on Answer Sheet 1 with a single line through the centre.

Questions 16 to 19 are based on the passage you have just heard.

16. A) They want to work for more people. B) They need training overseas， C) There is a nursing surplus there. D) They want to pursue a better development.

18. A) Fewer people will devote to heath care. C) The shortage of nurses will be more serious. B) The aging population is becoming larger. D) The need for nurses is going to fall down.

21. A)He joined a high school basketball team in his third year. B) He once studied at the University of South Carolina. C) He was very outgoing when he was a little boy. D) He was famous for using his quickness and strength to reach the basket .

22. A) He jumps very high to reach the basket. B) It looks like he could fly while shooting the basket . C) He is quick to shoot the basket. D) He is famous for running fast. Questions 23 to 25 are based on the passage you have just heard.

23. A) He may select a private school rather than a public school. B) He can apply for financial aid or scholarship. C) He can work part-time in the university . D) He may lower his cost on board and lodging.

24. A) It largely depends on the majors. C) It is the same for all the undergraduates. B) It is increasing sharply in recent years. D) It varies greatly among different students.

25. A) The cost is charged according to a law. B) The cost will be reduced according to the new system. C) Out-of-state students often pay more for the same program. D) International students pay the most for their study. Part Ⅲ Reading Comprehension ( 40 minutes ) 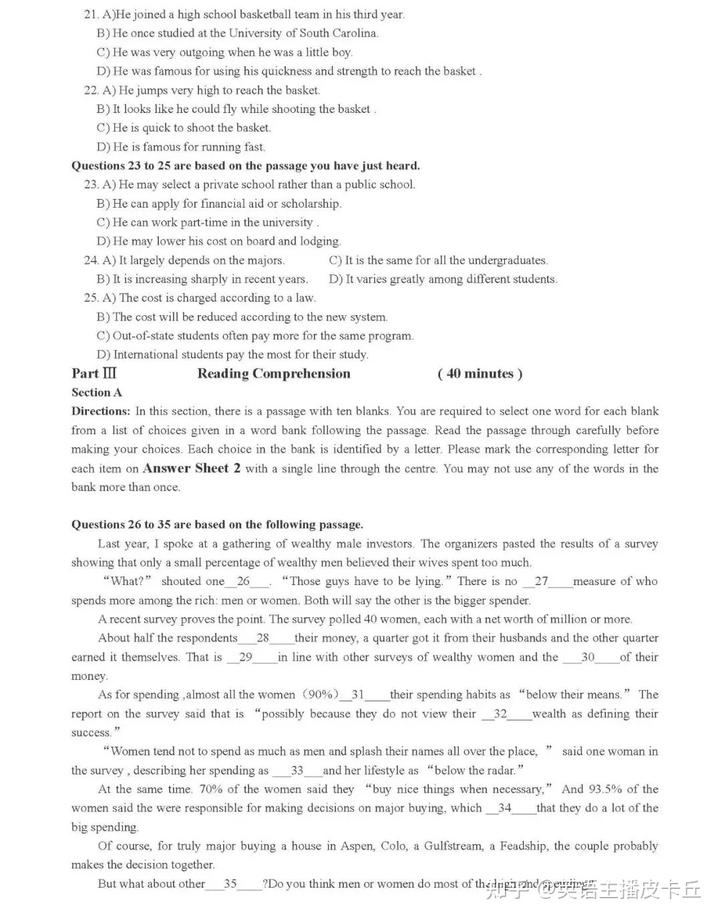 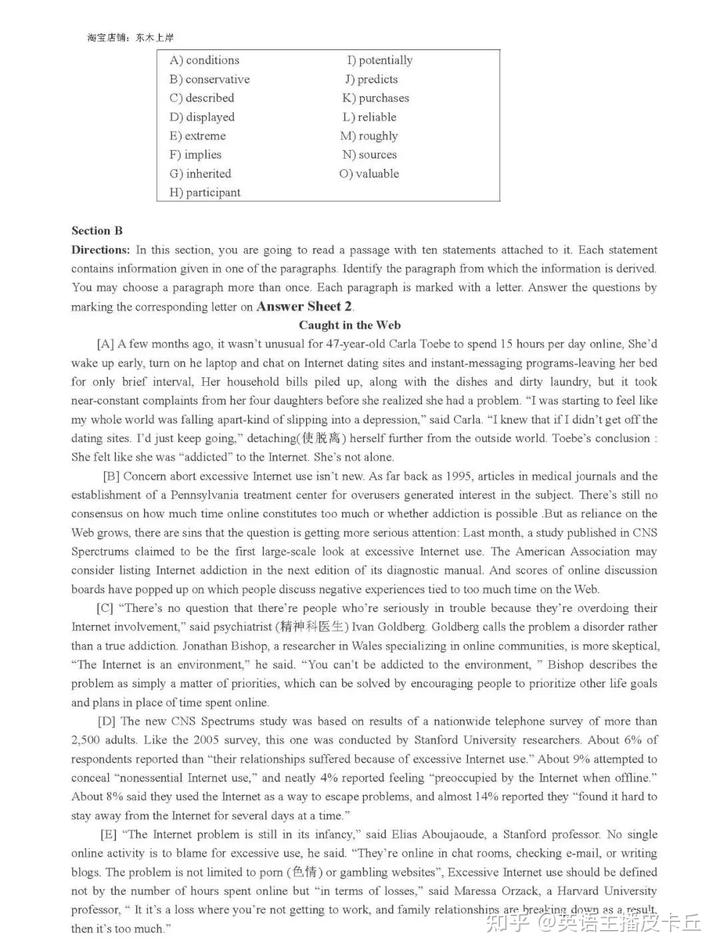 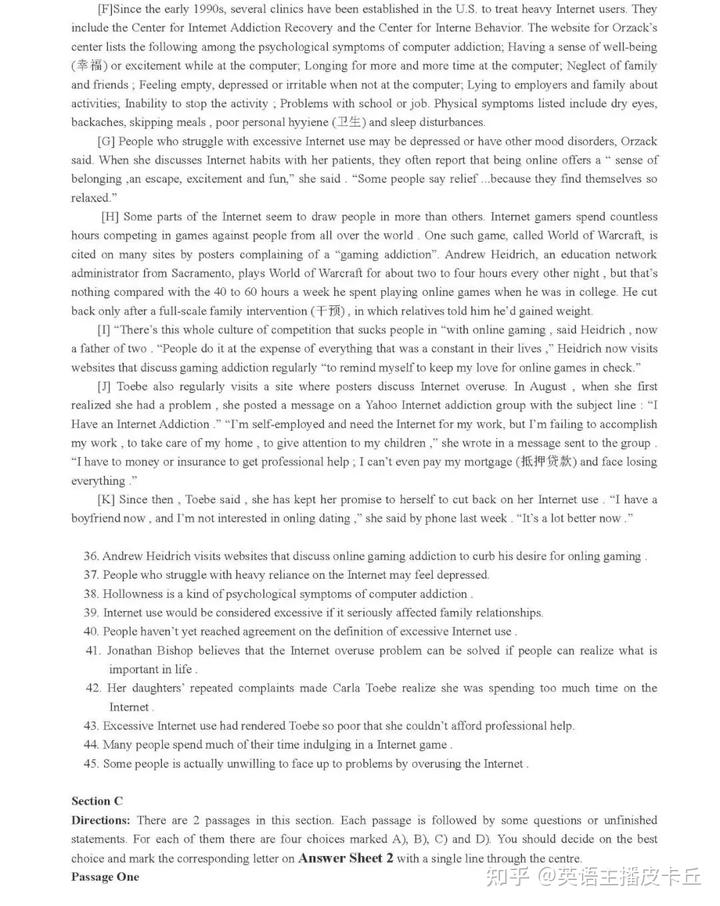 Directions: For this part， you are allowed 30 minutes to translate a passage from Chinese into

English. You should write your answer on Answer Sheet 2. 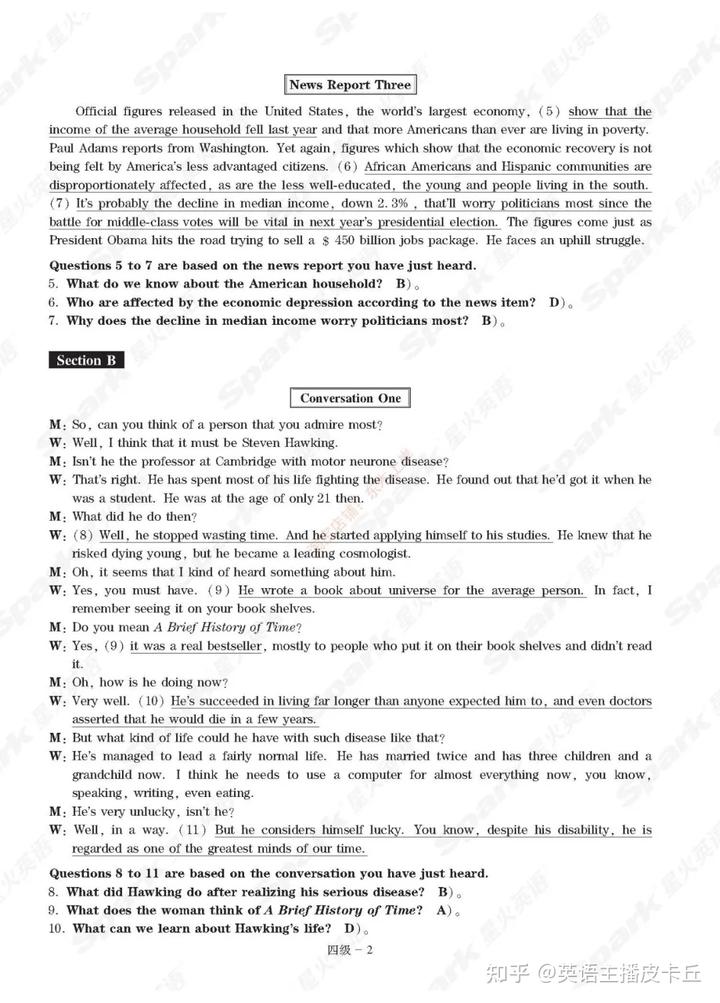 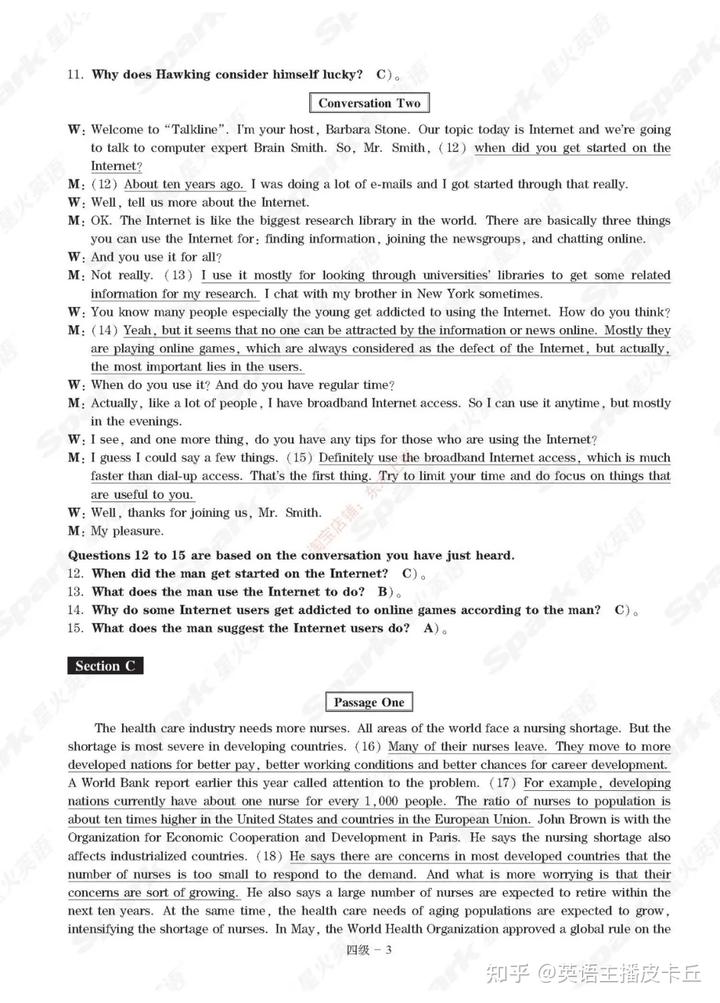 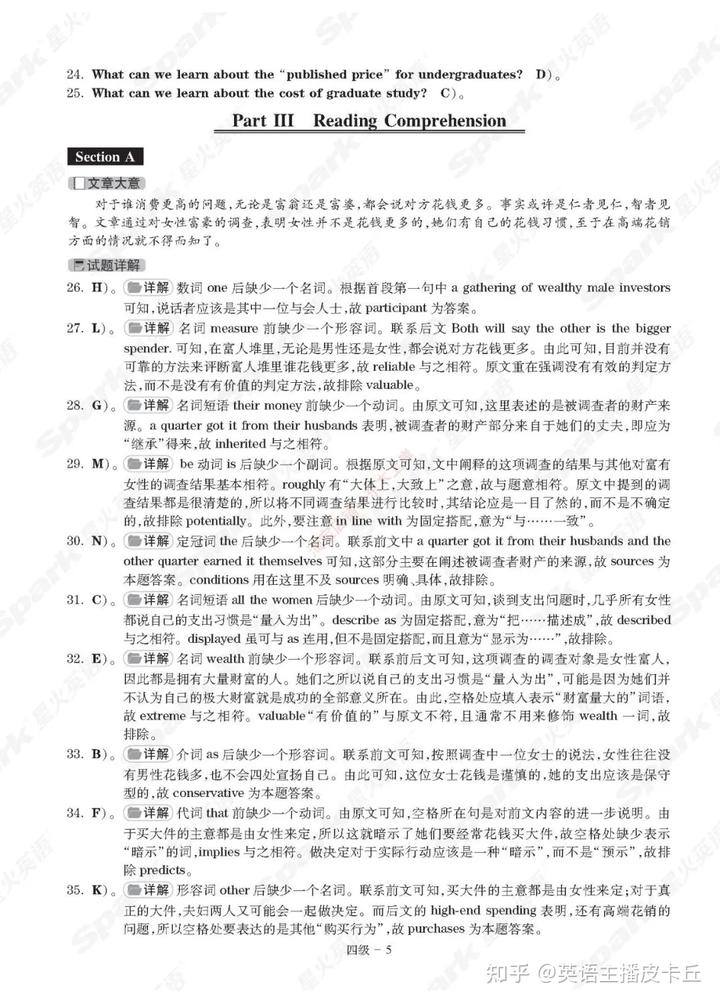 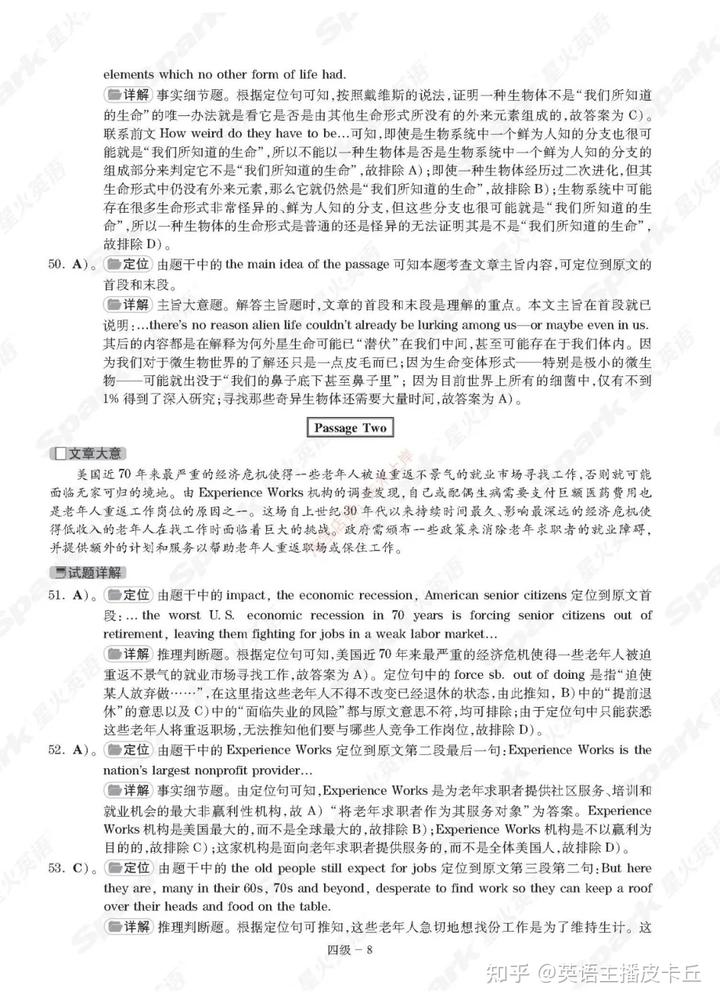